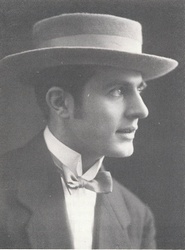 Edgar Willems was born in Lanaken, Belgium, on 13 October 1890. After studying to be a teacher, always attracted by painting, he enrolled at the Brussels School of Fine Arts. As for music, he was already interested in it, but mostly self-taught (not without having received a few piano lessons and having played in the brass band of his village). After a period rich in human and artistic experiences, he left Brussels for Paris around 1920. Immediately interested in several idealistic and spiritualist circles, he also frequented many painters and poets; in search of the realization of an ideal, he shared, for some time, the community life of Raymond Duncan, Isadora’s brother (it was a question of reviving, in the twentieth century, the Greek ideal through music, movement, weaving, painting and philosophy, whose practice was daily). It was in Paris, at the spiritual research centre of the Veilleur, that he met a professor of the Geneva Conservatory, Lydie Malan; the richness of her personality struck Willems greatly and encouraged him to take singing lessons in Geneva in 1925.

He also worked with remarkable musicians, Thérèse Soravia (superior solfège and organ), William Montillet (harmony) and Emile Jaques Dalcroze (rhythm). In 1928, he was entrusted with a course in philosophy of music and then, one year later, on the death of the titular, he took over Th. Soravia’s adult solfeggio course. His patient quest for auditory sensoriality, joining sensitivity then consciousness, linked to his total disagreement with the highly intellectualized musical teaching, gradually led Willems to conceive a musical education for young children.
His first works, published in 1934, and his first lectures (which were to become numerous later on, in Switzerland and abroad) led to the expansion of his activities at the Geneva Conservatory, which in 1956 opened the first introductory music courses for children aged 5 to 7, at the same time as he offered a course in introductory music pedagogy designed to train teachers. The Willems professorship continued until 1971.
Edgar Willems was also the inventor of a whole range of auditory equipment: the audiometer, the sound level meter, the audicultor, which earned him several patents.
Discreet by nature, he lived modestly while dispensing his inner wealth with a magnificent energy.

Text from the paper « In the perspective of a musical education » 1985, S. Gabus, B. Kull, F. Rosset-Buffle